The Noses on Our Best Friends Could Save Our Lives 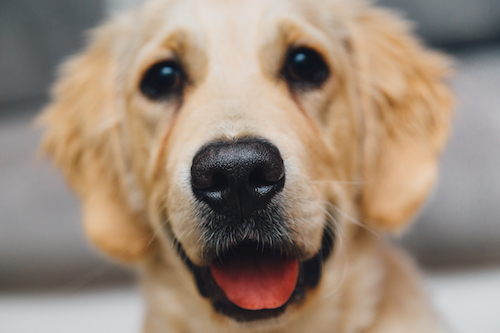 When Dina Zaphiris was a little girl, she often was asked by friends and family what she wanted to do in life. Her answer was always, “I want to work with dogs! I want to be the best!”

Dina indeed became a renowned pet dog trainer but her passion for dogs led her much further. My husband and I went to Chico last month to interview her.

As we arrived at a large dog-training facility with friendly wide-open spaces and pictures of Dina and her dogs over the walls, we were welcomed by Dina, her husband, and two of her dogs. Dina had a big smile on her face. Her dogs, Stewie, a beautiful Australian shepherd, and Linus, a playful German shepherd, both trained for cancer detection, immediately came to us. Stewie wanted to be petted and Linus wanted to play with a ball. We felt immediately at ease there and started to interview Dina about her passion for dogs.

Dina told us she was exposed to dogs at a very young age when she visited her uncle who was a dog breeder. Every summer since the age of 4, Dina handled dogs, thanks to her uncle. Dogs fascinated her. They were full of unconditional love, acceptance and playfulness. Her passion solidified when she left New York, came to Los Angeles, and met Richard Vye, a pet dog trainer and fellow student of Rudd Weatherwax (trainer and owner of the original Lassie in the film Lassie Come Home). That’s when she decided to become a pet dog trainer herself.  For several years she worked full time training dogs—especially movie stars’ dogs—but also dogs for search and rescue, epileptic seizure detection, balance support, and emotional support. Her passion for dogs led her to be the host of Animal Planet Show series Petfinder for one year.

Then in 1990, two things happened that changed the direction of her life: First, she heard about a study published in the Lancet describing how a pet dog was always sniffing a mole on a patient’s leg which prompted the patient to see a dermatologist who diagnosed a melanoma (by alerting its owner which triggered the resection of the skin cancer, the dog saved its owner’s life). Second, Dina’s mother Catherine was diagnosed with breast cancer. Catherine had very dense breasts but could feel a small lump in her breast that was not detected at first with a mammogram. It was only later, when the lump grew bigger, that a mammogram detected it. The Lancet study and her mother’s cancer got Dina thinking: What if dogs other than the one cited in the Lancet could detect melanoma? And what if dogs could detect cancers other than melanoma. Finally what if Dina could train dogs to detect cancers earlier than medical tests did?

These questions remained questions until 2003 when Dina heard that Dr. McCulloch in San Anselmo, California wanted to start a research project on dogs’ ability to detect lung and breast cancer through exhaled breath. This kind of project was what Dina had been thinking about for years. She knew that dogs had many more olfactory receptors than humans (300 million olfactory receptors in dogs versus 5 million in humans), and could detect smells one hundred million times less concentrated than humans could. She thought there was a very good chance that dogs could detect cancer by smell, so she contacted Dr. McCulloch and offered to work with him. He accepted her offer.

But questions arose. Could this results be replicated with other studies? Could other types of cancer be found through breath odor? Or maybe through skin, urine, feces or blood smell? What kind of Volatile Organic Compounds (VOCs) were the dogs detecting?

As questions arose, an incident occurred that confirmed that Dina was on the right track: When Stewie, was getting out of Dina’s car, the wife of Dina’s pool man got out of her own car to say hello. As the woman kneeled down, Stewie sat, put her paw up then backed up, then sat again, put her paw up again and backed up again, signaling that she was smelling cancer. When Dina apologized, the woman said, “No worries, I know I have thyroid cancer.” Dina felt relieved that the cancer was known, but also proud of Stewie who had diagnosed yet another kind of cancer, a kind that Stewie had not even been trained to detect.

But this brought a question of what to do in the future if one of Dina’s dogs was to meet in the street or in a store a stranger and signal by sitting and putting their paw up that it was sniffing possible cancer. Should Dina tell the stranger that the dog had possibly detected cancer or not? The more Dina thought about the answer to that question, the more she decided to not say anything to strangers for now. Many more studies needed to be completed before anything could be asserted.

But what if Dina’s dogs had alerted on me or my husband? We would probably have said nothing but would have done a complete check-up rapidly upon returning from our trip. Fortunately, the dogs didn’t alert on us.

And what if one of Dina’s dogs alerted on one of Dina’s family members? That brings us back to Dina’s mother Catherine. Unfortunately, Catherine had her first breast cancer long before Dina’s dogs were trained to detect cancer and after several breast cancer recurrences, in 2007, Catherine’s breast cancer spread to other parts of her body and she fought for her life with the help of several chemotherapy treatments until her death in 2010. Dina wondered if she had trained her dogs to detect cancer earlier, the animals could have diagnosed her mother’s breast cancer in 1990 at an earlier stage and kept her mother alive.

In memory of her mom, Dina created the In Situ Foundation in 2010, a 501(c)3 non-profit organization that trains dogs to detect cancer.

Since 2007, Dina has trained dogs to participate in several studies: A second study with Dr. McCulloch to detect ovarian cancer in exhaled breath and a study in Maui where Dina trained 10 Labradors to detect urinary tract infections in urine of disabled people. Dina also worked in partnership with Jeffrey Marks at Duke University (Department of Surgery) who provided samples of exhaled breath of patients diagnosed with ovarian cancer and Dina trained two dogs to detect oropharyngeal cancer from saliva samples for the head and neck surgery department of UC Davis.  Most recently, Dina partnered with Enloe Medical Center in Chico and is currently training a young dog named Enloe to detect several kinds of cancers from breath and urine samples.

Other publications all over the world:

As for other publications, other than McCulloch’s (with Dina’s help) initial publication in 2006, many other studies with cancer sniffing canines have been published.  Among those:

In Japan in 2011, Hideto Sonoda and colleagues studied the ability of dogs to detect colorectal cancer from exhaled breath and stool samples of patients with and without colorectal cancer.  They found the dogs had high sensitivity and specificity for even early cancer.

In France also in 2011, Jean-Nicolas Cornu et al. published in European Urology Journalthe study of one dog’s high ability to detect prostate cancer from the smell of urine.

In Sweden in 2013, György Horvath and colleagues published a study on 2 dogs’ ability to detect ovarian cancer from smelling one drop of blood plasma. The researchers studied 42 ovarian cancer patients and 210 healthy controls. The dogs detected the cancer with 97 percent sensitivity and 99 percent specificity.  In part 2 of the study, the dogs were able to accurately predict that 3 patients would have a recurrence of their ovarian cancer.

in Italy in 2014, Gianluigi Taverna studied 2 German Shepherd’s ability to identify prostate cancer in urine samples.  Dr. Taverna studied 362 patients with prostate cancer and 540 healthy controls.  Sensitivity and specificity were very high (over 97 percent) for both dogs.  The results were published in the 2014 Journal of Urology.  Similar studies were done in the United States.

But the question that everybody is asking is:

Are we ready to use dogs to diagnose patients on a routine basis?

The answer is: We are close to that point but we haven’t started yet. We need more high volume double-blinded controlled studies.  But in the future, when we actually start exposing patients to cancer-detecting dogs, we will potentially diagnose early cancers, giving patients a better prognosis because dogs can detect cancer just by smelling one drop of our urine and one sniff of our breath and thus detect cancers at their earliest stage.

What does the future hold?

Dina and many researchers want to find which Volatile Organic Compounds (VOCs) are present in breath, saliva, plasma, urine and feces of people with cancer. For one thing, researchers have been trying for many years to create an electronic nose, using mass spectrometry, to detect cancer. But so far these efforts have not approached the success of Dina’s animals. Presumably, Dina’s dogs are detecting some kind of VOCs, but exactly which molecules are the canines sniffing?  Candidate compounds, based on known cancer biology include those with exotic names such as dimethylarginine, pyrophosphatase, peroxiredoxin, human kallikrein-related peptidase, urokinase-type plasminogen activator, a prostasome, and annexin. But are the cancer-associated VOCs one of these simple molecules, or do the cancer signatures include combinations of 2 or more such chemicals? We really don’t know yet.

Maybe one solution to detecting early cancers is to have laboratory researchers work with cancer-detecting dogs, adding each suspect molecule and combination of two or more molecules to normal urine or breath, then examine the dogs’ reactions in order to discover which compounds signify the presence of cancer.

Perhaps another simple solution to detecting early cancers would be to employ dogs part-time or full-time on a routine basis. Wouldn’t it be ironic if at a time when we use more and more sophisticated technologies, such as machine learning and artificial intelligence, and at a time when we are seeking to replace human workers by robots, we end up paying dogs and their owners for their cancer-detecting work?

Then maybe our dear canines with their unconditional love will help once more save humans’ lives.

And maybe, because of her passion for dogs, Dina will reach her dream, be the best dog trainer in the world to diagnose cancer. Her ultimate goal is to standardize protocols all over the world and coordinate multidisciplinary research centers, creating teams of biochemists and olfactory scientists that will share discoveries and results. Perhaps, by helping identify which VOCs signify the presence of cancer, Dina’s work will ultimately lead to the creation of an electronic nose, discovery that could win a future Nobel Prize.