Saving Lives with Her Nose 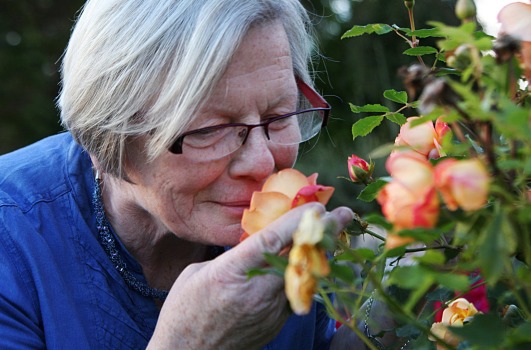 Maybe we get a backstage pass to meet Bruce Springsteen before a concert, to sit next to Michael Jordan on a cross country flight or to interview a Nobel prize winner.

My wife, Dr. Chris Gilbert, and I had such a once-in-a-lifetime experience  when we traveled to Scotland this month to interview a retired nurse named Joy Milne, who, as of this writing, is the only documented person in the world who can accurately smell the presence of Parkinson’s disease in patients, sometimes full ten years before that person develops symptoms of the disease.

Joy’s unique ability has been proven through controlled trials at Edinburgh University and documented in an earlier PT blog.

A physician, my wife Chris wanted to learn more from Joy and her biomedical collaborators in the UK, (including Dr. Perdita Barran of Manchester University) about which molecule or molecules Joy senses when she detects the disease, and what the presence of such molecules in Parkinson’s patients can teach us about early diagnosis and treatment of the devastating  illness, which afflicts over 1 million Americans (more than Multiple Sclerosis, Lou Gehrig’s Disease and Muscular Dystrophy combined).

But I had a very different mission: As a sensory neuroscientist, I wanted to understand what about Joy’s sense of smell, and the way her brain processes sensory information, was different from “normal” people, and how such differences might explain her extraordinary ability.

The first thing Chris and I learned is that Joy belongs to a small group of “super smellers” who can detect very faint traces of subtle odors and discern nuanced differences between similar, but distinct odors. Such rare “noses” are in high demand at perfumers, vintners, fragrance manufacturers and food conglomerates.  A major perfumer in France who ran Joy through a battery of tests used to spot promising “noses” among prospective employees, established that Joy’s nose “scored off the charts,” and that her acute sense of smell lay somewhere “between that of a dog and a human.”

But as Chris and I listened to Joy tell the story of how she learned that she was a officially a  “super smeller,” I wondered if there weren’t more to her abilities than an exquisite sense of smell.  Surely other “super smellers” had been exposed to Parkinson’s disease over the last several decades, but Joy was the first one to notice a distinct odor associated with the disease and to report her experiences to biomedical researchers. Why?

Is Joy a super star even among the rarified ranks of “super smellers” or is there something else unique about her, beyond her sense of smell. Does she have unusual powers of focus or concentration, for instance, that predispose her to pay at lot more attention to odors than “normal people?’ Or does Joy have the equivalent of a photographic memory for smell (odoroographic memory)?

To explore whether non-olfactory perceptions, cognitions, associations, memories or intuitions might contribute to Joy’s extraordinary ability, I asked her a long series of questions about her subjective experiences when exposed to the Parkinson’s odor.

Initially, the only non-olfactory trait that Joy said she had that might help her detect the illness is her ability to focus all of her attention on small details. As a nurse with decades of experience, she’d learned the value of paying attention to seemingly inconsequential symptoms such as a slight yellowing of the whites of the eyes, or a waxy complexion that could signal the presence of a serious condition.

After peppering Joy with one question after another, as afternoon turned into evening, I worried that I wearing her out, and was about to bring the grueling interrogation to an end when, my eye fell on some of the wonderful art that Joy had sketched hanging on her walls. Joy was clearly a very visual person. I asked “Do you have any visual experiences when you detect the Parkinson’s smell?”

Joy jerked a little, as if startled by a loud noise. She thought for moment then said. “Yes, I do.”

“What do you see?” I asked, getting excited about an idea forming in the back of my mind.

“It’s like a cream colored ooze.” She thought for a full minute, then went one. “And brown, there is brown.”

“You mean that you see blotches of cream and brown? Can you be more precise,” I asked?

Joy thought hard, evidently working out how to put her visual perceptions into words.

Watching Joy closely, Chris had an idea. “You’re a talented artist. Can you draw for us exactly what you see?” In response, Joy stood up from her chair in the living room where we’d been watching a 1 hour BBC special on her, and took us to her kitchen where she retrieved a sketch pad and set of colored pencils, and proceeded to draw the images below.

Over the next 90 minutes, as Joy sketched she explained what she was drawing. Here are the key take-aways from her explanations.

Toward the end of Joy’s narration I asked, “As you’re drawing these images, are you smelling anything?”

Joy leaned back, putting down her pencil. She whispered in awe  “I just caught a whiff!”

It seems that when Joy smells, she sees, and when she sees, she smells. This was the idea at the back of my head that prompted me to ask  earlier if Joy could “see” smells.

“I think you’re a synesthete, Joy” I went on to explain the phenomena of synesthesia, in which some people (3-5% of the population) involuntarily experience sensations in one sensory modality, such as vision, when stimulated in an entirely different sensory modality, such as audition. The artist Kandinsky, for example, painted images that showed up in his head when he heard sounds. The writers Proust and Nabokov were synesthetes, as were the painter Vincent Van Gogh, composer Franz Liszt along with  Billy Joel and Duke Ellington.

After  politely listening to my long explanation Joy said, “My sister has it [synesthesia] too, but she “sees” smells in colour whereas, I smell, then see flowing colour and abstract shapes.”

(It turns out that synesthesia does often run in families.)

So, perhaps I’d found what I came to Scotland to learn: what is unique about Joy’s nervous system. Yes she has an exquisitely sensitive nose, but she apparently also employs non-olfactory parts of her brain—the visual regions of her cerebral cortex—to process olfactory sensations. Possibly, one reason Joy excels at detecting Parkinson’s disease is that she engages more neurons (i.e. visual neurons) when smelling odors than “normal” people.

Dr Laura Speed and colleagues at Radboud University in the Netherlands recently conducted a study of synesthetes that supported this hypothesis. Dr. Speed’s team found that test subjects who experienced colors whenever they smelled odors, outperformed “normal” subjects at discriminating subtle difference in both odor and color.  “Synesthetes are better at discriminating colors and smells, and in naming odors” Dr. Speed concluded.

This finding is consistent with previous work in cognitive psychology demonstrating that bringing multiple sensory modalities on-line improves cognition and memory. For example, test subjects asked to recall a list of 10 random words such as  bun, shoe, tree, door, hive, stick, heaven, gate, vine and ten, typically get 2-4 words correct after being asked to recall the words an hour later. But if the test subjects are asked to rhyme each word on a list with a number that sounds similar., for example, one is a bun, two is a shoe, three is a tree, four is a door, five is a hive, six is sticks, seven is heaven eight is a gate, nine is a vine and ten is a hen, they exhibit  almost perfect recall of the arbitrary list even years after being exposed to the list of words. When test subjects are asked to conjure up an image linking the arbitrary word to numbers (for example, by imagining the number 1 stuck in a bun, or a 3 dangling from the branch of a tree, or a vine tangled around the number nine, they perform even better.

Bottom line: the more of our brains we engage in a task, the better we are at that task.

And Joy, as a synesthete, naturally and involuntarily does this with smells and visual imagery.

Could we focus Joy —and synesthetes like her —on detecting diseases such as cancer, where early diagnosis and treatment spell the difference between life and death?

My wife Chris and I are following this research closely, hoping for the first whiff of success.