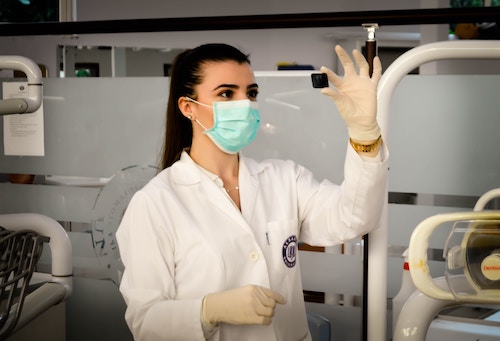 3 lessons to be learned from Michael’s story

New miraculous drugs against colon cancer are being discovered and tested in clinical trials as we speak.

Just a few months ago, in June 2019, at the age of 57, Michael felt unwell with low-grade fever, loss of appetite and diarrhea. At that time, he was in Portugal on vacation with his wife and thought he might have simply caught a virus. But these nondescript symptoms persisted.

So he found a doctor who gave him a five-day course of antibiotics. The fever went down but he still had diarrhea. A few days later, having reached Lisbon, his symptoms got worse: his diarrhea became bloody, he had intestinal cramps, and he felt—and could see—a mass in his right upper abdomen below the ribs. Alarmed, he went to a local hospital in Lisbon. A CT scan was performed that detected a tumor in his right colon.

Was it cancerous? Maybe not because Michael’s last colonoscopy three and a half years prior was clear and he had no history of colon cancer in his family.

But since Michael needed surgery to remove the tumor, he flew back home to Boston and had surgery at the Massachusetts General Hospital.

It turned out that Michael’s tumor was a large cancerous one with a diameter of about 10 centimeters completely blocking the right upper colon. Eight out of 10 lymph nodes were positive for cancer, making it stage 3C. Fortunately, there were no other metastasis.  A PET/CT scan showed no other tumors or hot spots. The prognosis was not bad at that time. Michael began chemotherapy with FOLFOX, the gold standard in this situation.

Yet, after surgery and six weeks of chemotherapy, suddenly, while doing yoga, Michael felt a stabbing pain in his right lower ribs.  He went straight to the hospital.  Another CT scan was performed. It showed that despite surgery and aggressive chemo, there were more than 12 liver metastasis in addition to a cracked rib (which was the one responsible for Michael’s stabbing pain). This was now metastatic colon cancer, stage 4.

How could Michael’s cancer have progressed so quickly despite being on chemotherapy?  Michael and his doctors were puzzled.

Had Michael been in a small town in the countryside, or had it been just a few years ago, his doctors might well have told him that nothing more could be done for him and that he only had a few months to live.

Quickly, Michael was enrolled in a small phase 2 clinical trial using a combination of 3 Checkpoints Inhibitors.

Those drugs worked quickly: After just 6 weeks of taking those new medications, Michael’s cancer markers are down, and Michael feels spectacularly better.

Michael is not yet out of the woods and cancers can be sneaky, but a number of patients with similar cancers who are taking this therapy are in complete remission, and the early signs in Michael’s case are hopeful.

It is the miracle of new medicine.

What can we learn from Michael’s story?

If Michael had not been treated by one of the best colorectal cancer specialists in the country, he might not be with us anymore today.

So, if you or a loved one is diagnosed with cancer, always get a DNA analysis of the cancer cells and get a copy of your results. The underlying genetic mutations driving cancer are targeted by new drugs.

If the cancer cells have a BRAF V600e mutation, they will likely be very sensitive to Checkpoint Inhibitors.  Those drugs are taken in the form of oral pills and sometimes a monthly infusion, they don’t have too many side effects and can work spectacularly.

It doesn’t matter where those cancer cells are.  There are studies showing BRAF V600e mutations in many different organs of the body.

The FDA has approved the use of Checkpoint Inhibitors for metastatic melanoma, metastatic bladder cancer, kidney cancer, head and neck cancer, lymphomas and non-small cell lung cancer because they had cases of spectacular results with tumor shrinkage and sometimes complete disappearance of metastasis.

Studies show that a few patients with metastatic melanoma to the brain are still alive after 5 years of being on the drugs when a few years ago, they would only have survived a couple of months.

Stephanie Toll from the Children’s hospital in Los Angeles described (OncoTarget January 2019) that Checkpoint Inhibitors were highly effective in 3 cases of very aggressive brain tumors in children with 2 of the 3 children having no detectable cancer after 2 years of treatment.

So, the lesson is:

If a doctor tells you there is nothing more that can be done, take your fate in your own hands and get a second, a third and/or a fourth opinion in major teaching hospitals where genetic diagnostics are done and clinical trials are conducted.

Get into a clinical trial using immunotherapy or participate in gene-editing studies that use CRISPR/cas9 and CAR-T cells to genetically modify the immune cells of the patient, enabling those immune cells to attack cancer cells.

Michael’s previous colonoscopy was three and a half years prior and was clear.  His doctor’s recommendations were to get a colonoscopy every 10 years.  Yet a 10-year interval between colonoscopies is clearly too much because some cancers grow very fast.

Colorectal cancer is the third most common cancer and the second leading cause of cancer-related death in men and women in the United States (according to the American Cancer Society) so we need to detect it early.

How can colorectal cancer be detected early?

My personal take on this, considering Michael’s story, is that people should really do both: Get a colonoscopy every 10 years and have their stools checked every 2 years for blood.  In fact, if you really want more peace in mind, have your stools checked for microscopic blood every year starting at the age of 45 years old (instead of 50).

Chances are that if there is early cancer, it will start oozing a little bit of blood every day, too little to be caught by a naked eye, but big enough to be diagnosed by the lab.

Another early detection of colon cancer is to do a stool DNA test (the one approved by the FDA is called Cologuard).

Those early detection tests can be lifesavers.

Detecting colon cancer early is good but better yet would be to prevent it from happening in the first place.

The way to do this is to be aware of the risk factors for colon cancer and actively work on reducing them:

The risk factors for colon cancer are:

So, the lesson is:

And thanks to Michael’s story, let’s use the lessons we learned today to save our life or the life of a loved one.